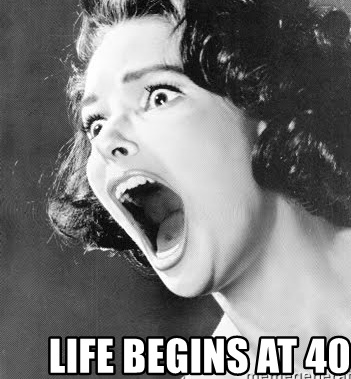 In recent times, I have come across all manner of people, I have interacted with men and women from all walks of life who have one challenge or the other in Marriage. By the special grace of God I have managed to save many marriages and made them stronger. In doing this, one group distinctly stands out, they are the most difficult group to deal with, it takes a while before they get to breaking point, but when they do, it’s almost impossible to get them to change their minds. This group is women who have just turned 40.

I believe the saying “life begins at 40” may actually refer more to women than their male counterparts. I have observed that once some women turn 40, something major shifts in their personality, they becomes bolder, more rebellious. more focused, more opinionated, and more emphatic about what they want. Don’t be surprised when a previously very obedient and submissive woman turns 40 and changes completely. At this age, she may not go with the flow anymore, she may begin to question some of your instructions and even the way you behave, she will also become more outspoken and will not be afraid to speak her mind.

There is something definitely special about turning 40 for women. So if she is approaching 40 you may begin to see a bolder and more out spoken side of her. If she has never challenged or questioned your instructions, get ready to be shocked by her boldness and confrontational attitude. The only way to avoid a total breakdown of peace and harmony is to become fair, objective and reasonable in your approach to issues at home. Bear in mind that at this age she also harbours a lot of regrets about the decisions she has made in life thus far, you may be one of them. If most women turned 40 before marriage, they probably won’t marry their present husbands because a woman at this age is a better judge of character and will evaluate a man using very different parameters.

You must recognise the fact that she has crossed the threshold into the wise age and accord her the required respect. She may not be easily cowed and will be more likely to assert her independence and mental liberation. She will become immune to the scheming, manipulations and mind games which you may have used to control her in the past. At this age she is already tired of playing games and will be more focused on securing a future for herself and for her children. Whatever the issue at home, do not threaten her with divorce if you are not ready to see it through, she may already have a whole new life planned and you may not be a part of it. Thread carefully if you still want to remain married.

Men must start on time to prepare for this phase in the lives of their wives. What you put in is what you get. If you have treated her fairly, then you don’t have anything to worry about, she will begin to appreciate you better if for any reason she didn’t do so in the past. If on the contrary you haven’t been nice to her, fasten your seatbelt, the ride is about to get bumpy. Women don’t forget those who hurt them and by her actions and utterances you will know that she is out to show you that she is no longer that little girl you married.

This is usually when the temptation to try and get her back in line or even hit her soars, resist it and walk away when you can. The greatest mistake you will make is to fight her or resist this natural liberation, that may be the beginning of the end for the marriage. At this stage, random displays of love and affection usually douses the effects of whatever hormones causes this rebellion. No matter how stubborn she gets, respond with love and understanding, this stage doesn’t last for too long if you let her exhale. She will complete the transition into the stage where she becomes more matured, patient and understanding. To survive this volatile stage in the growth of your wife, you must assume a position of tolerance and understanding – Sir Stanley Ekezie