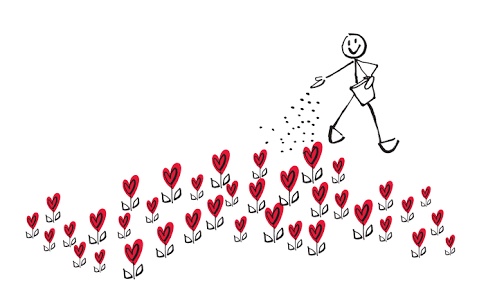 I know I have written about this a couple of times, the fact that how we relate with each other as a couple affects our children cannot be over emphasised. A man just informed me that his son stabbed a fellow student to death over a minor argument, the man and his wife have had serious issues for most of their married life, the woman moved out a week before the incident. The poor boy is a product of his parents failings as parents and as a married couple.

When a couple starts to have issues in their marriage, when the conditions deteriorate at home, the children naturally bear the brunt of the problem. When two elephants fight, it is the grass that suffers. People often believe that appeasing children with material things make up for the damage to their emotional health, while this may temporarily dull the pain and heartache these kids endure, the damage marital problems unleash on children is irreversible.

A child is born pure and sinless, who and what that child becomes is as a result of what has been sown in him/her by those closest to him. A child becomes what he sees and hears, it forms the core of his character. Couples sow hate in the hearts of these innocent children when they fight and quarrel regularly before them, this hate will grow and become a way of life for these innocent children. In very rare cases a child’s resilience and total refusal to accept the parents faults as he’s may help him break free and form his own character.

Growing up I never saw my parents argue or fight. I remember telling my dad even before I got married that if I marry and my wife argues with me or challenges me, I will send her packing, I told him I wanted a marriage just like what he has with my mum, no arguments or quarrels. He smiled and looked at me with so much love and said “son, when the time is right I will tell you a few things that will help you in your marriage”.

A few days before my wedding I reminded him and he looked at me and said “your mother and I used to argue all the time, sometimes very seriously, we shielded you and your siblings from all of it, you never think of sending your wife packing no matter what because it breaks both of you forever, be patient, be tolerant and understanding” Not being exposed to negativity, quarrels and fighting, I became what most consider as soft and compassionate, because I never

While it is impossible to live as husband and wife without disagreeing on issues or quarrelling, it is possible to shield the kids from the problems until they are old enough to handle them. Every child deserves to experience love, not just read about it or watch it on TV, they should see affection, tolerance and friendship being practiced at home. This ultimately strengthens their emotional health and prepares them for life.

There is so much crime and injustice in our society today, people seem to be loosing their humanity, wickedness, hatred, envy and avarice have become the other of the day. I am almost certain that being exposed to hatred and lovelessness has helped to reengineer the way the human mind works, rather than be compassionate and understanding people are now judgemental, envious and wicked to each other. This generation is becoming too individualistic, selfish and mean, kids now sell everything including their love and affection.

Humanity is under attack and we have failed to realise it. Charity begins at home, we can fight back by ensuring that our kids are raised in the most loving and caring environment, exposing them to positivity, teaching them how to support each other and people in need, showing them leadership with compassion and follower-ship with loyalty, integrity and obedience. At the end of the day, it’s all about happiness, companionship and children, let us for their sake sow love and compassion instead of hate – Sir Stanley Ekezie