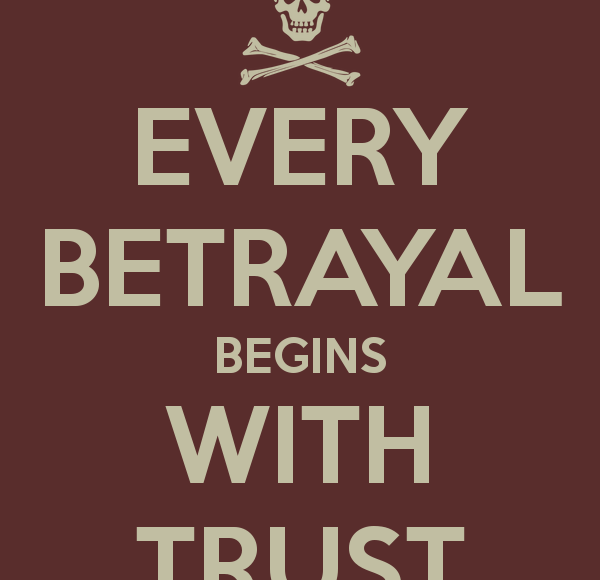 One of the most hurtful sins in a marriage or relationship is betrayal of trust by a spouse or partner. When betrayal is mentioned, people think of sex and an affair or emotional relationship with someone else, while cheating remains a very serious act of betrayal, there are so many other ways a person can be betrayed by his partner, these are equally as serious. Gossip, spousal character assassination and physical abuse which is probably one of the most serious forms of betrayal. Hitting the same person you promised before God and man to love, honour, respect, obey in a situations good or bad constitutes a serious act of betrayal.

In an ideal situation couples are supposed to tell each other everything, this includes one’s innermost weaknesses, fears and honest feelings about other people. The closest couples gossip about everything, and it is expected that this stays between them, but some spouses  will in times of quarrel or disagreement use these things against a spouse, some will make derogatory remarks about a spouse’s weakness or flaws, others may tell a third party things which a spouse shared with them in confidence, this includes things said against friends, colleagues and family members. This constitutes a very serious act of betrayal, most partners especially women will find it extremely difficult to forgive and will dwell on it for a very long time. In most cases this may permanently damage the close relationship previously shared by a couple. The aggrieved person may also develop very serious trust issues and will begin to keep things from her partner.

In a marriage or relationship, it is almost impossible to go through it to the end without having issues with a spouse’s or partner’s immediate or extended family, the assumption is usually that your spouse will support you against his/her family no matter what, you expect that even where and when you have erred, they will not humiliate you in the presence of their family. It is usually better to protect a spouse in public and condemn in the privacy of your bedroom. Sadly most married people have failed in this regard, they have failed to realise that supporting your spouse against your family is not weakness, it is a show of strength which will on the long run earn you the admiration and respect of both your spouse and your family. This is a very serious act of betrayal, once which will only guarantee disrespect and disdain from your spouse and even your extended family.

Another very irritating habit that amounts to serious betrayal is gossip. It is very annoying when you see a grown man or woman making derogatory remarks about a spouse with whom they still reside, if these remarks are made in an attempt by a third party to resolve issues, it maybe partially acceptable, but care must be taken to avoid going over board. Sometimes in a attempt to complain about a spouse to a mutual friend, a person may go too far in condemning his/her spouse with vary unsavoury language which usually will be reported back to the spouse. Some others for no reason will condemn everything a spouse does. Men especially are guilty of this, some men will not see any good thing in whatever their wife does. They will criticise her cooking, cleaning, dressing etc behind her back. They will always make snide remarks about her sometimes even in the presence of her friends and family. It is very difficult to restore a marriage which has descended to this level.

Finally, open verbal abuse constitutes betrayal. A man who goes about calling his wife all sorts of names, dirty, useless, prostitute, wayward while still married to her has mental problems. How can a sane person be married to a woman who he honestly believe is a prostitute. How will a man like this ever have the audacity to sleep with or demand to sleep with a woman who he believes is a prostitute and how can such a woman ever feel love towards this man ever again. There is such a thing as crossing the line in a relationship or marriage, most marriages will not survive this. On the other hand there are women who will insist on assassinating their husband verbally. Names like useless man, weak man, impotent, drunk etc are commonly used by women who will still allow this useless man sleep with them. These crop of women have no place in marriage.

Never ever make derogatory remarks about your spouse to his or her friends. Make sure your ascertain the level of friendship your spouse has with the person you intend to complain to. Not all friends are real friends, your spouse may not forgive you easily for talking to the wrong friends. Do not call a woman a prostitute and still remain in the relationship, it casts a shadow on your self esteem and mental health. A woman who publicly makes derogatory remarks about her spouse is not fit to be someone’s wife – Sir Stanley Ekezie