I have observed from my interactions with married couples that infidelity as previously assumed is not the leading cause of marriage breakups. There is a more sinister and extremely dangerous catalyst in relationships and marriages problems, PRIDE. This is the leading cause of relationship and marriage breakups, it is extremely effective in facilitating breakups because it blinds a couple to reason, makes them deaf to good counsel, leaving them thinking only about themselves.

Even in cases where infidelity is the main issue, the presence of pride makes it impossible to achieve a full recovery. Don’t let pride destroy your marriage or relationship. If you love your spouse and you are not ready to leave him or her, make the move and work towards reconciliation. It is possible for one person to want the marriage more than the other, if you are that person, don’t let pride rob you of your happiness, be selfish about keeping what makes you happy, fight to keep your marriage intact, your spouse will catch up later.

My wife and I had an issue once, this problem lingered for longer than usual, I was convinced I was right and therefore determined to keep the malice until I receive an apology. My wife on the other hand may have agreed with me, but was very unhappy about the timing and my approach, we had a stalemate. My parents counselled us, my siblings were busy running around inviting pastors

to try and resolve the matter. All the efforts failed and we continued on the path to self destruction. I saw my marriage crashing right in front of me, 15 years of marriage down the drain, yet I was adamant, determined to make my point; foolish pride prevented me from considering anything else but my ego.

Then came that faithful evening when I got liberated from pride. I came back to an empty house which for me was the wake up call, my wife and kids had gone to run a few errands, I knew at that point that I wasn’t ready to live alone, I love my wife too much to let her go, I thought about my kids and what it will do to them. My wife is not a bad person, She may have done something wrong, but the way I handled it wasn’t the best. That evening when she came back, I called her into our room, she already had her guards up incase I wanted to continue the argument.

I opened my mouth and swept her off her feet, I started by humbly and sincerely asking for her forgiveness for having put us through the stress and the tension in the house, stress on the kids and even on our domestic staff, I felt the tension between us dissipate almost immediately, my soul was at Peace once again. She also apologised and even blamed herself for not apologising earlier.

I didn’t blame her for that, she was always the one who made the move for reconciliation whenever we quarrelled, even when it wasn’t her fault and I took her for granted for that, this attitude was what got her fed up and made us wander too close to separation. That rock bottom we sank to thus became the foundation on which our marriage stands today.

Without that simple move, I am convinced my marriage would have crashed, not because of the seriousness of the problem, but simply because my wife and I were overwhelmed by a debilitating pride which almost destroyed our marriage. Despite the fact that I am the man, the head of the family and the sole breadwinner at the time, I showed maturity and leadership by taking the lead on accepting my faults and apologising to my wife and children.

I realised that leadership is not just about giving orders and expecting respect, it’s about taking the lead on everything and leading by example. By that singular act of compromise, I averted a family problem which would have lingered for years, affecting the children and both extended families. I made a choice to focus on what’s more important, I chose my marriage and happiness over pride and personal gratification which comes from winning. I conceded in the battle of pride and won a lifetime of happiness. 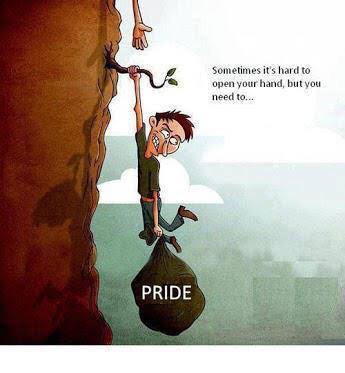 This is the story of most marriages which have been prematurely terminated, unions which would have gone ahead to become the very quintessence of marriage, cut short because no one conceded, no one was bold enough to swallow their pride. Having gone through this experience, I often wonder how pride finds its way into marriages, How do we end up being proud to someone who has seen us at our lowest and most vulnerable moments. I am compelled to blame the devil as usual, but the fault is ours more than anyone else’s.

You must learn to always compromise, one or two of you must be willing to put your pride aside and concentrate on what really matters, it doesn’t matter who is at fault or who has been hurt the most, be the stronger more matured person, take the lead and let Peace reign in your home. You must communicate and resolve issues immediately. Remember you don’t have anything to prove to each other, winning or loosing an argument or fight shouldn’t matter, there is no price or trophy at stake, everyone has a conscience which so accurately tells you when you are wrong, listen to it and apologise when necessary. Compromise today for a lifetime of peace and happiness – Sir Stanley Ekezie

2 thoughts on “Pride goes before a separation / divorce”